Hustle has gotten me a long way in life. I hustled my way to play basketball at a Division 1 school. I hustled my way in my first job as a liquor salesman. I hustled my way back to be able to walk again from being paralyzed. What couldn’t hustle solve? That’s right, my startup that I was working on with my best friend.

We had a big idea to solve the way people make friends. After saving up some money I decided to leave my well paying job as a wine & liquor salesmen for E&J Gallo and pursue it full time. Truth be told, my foot was already out the door and had been for a while at Gallo anyway. We had moved into NYC a while back into a one bedroom apartment to code all day and night only of which to be broken up by eating and working out.

Will had been programming for quite a while, while I on the other hand had just really started. I could barely hack things together a lot of time was spent with Will teaching me various things and me trying to figure out stuff. I figured I would just hustle and learn as much as possible to build our product and then go from there.

**We white boarded a stripped down version of what we wanted to build (MVP) and since my programming skills were limited Will handled most of the product building. I would help out where I could and also try to 1) get as many users as possible. After we got users, 2) we would apply to an incubator and/or raise money, 3) keep iterating on something we love and take over the world. The big idea for Social Blendr being we would introduce people online first using conversation based games then set up in real life meetings where they could then use the rapport they built to grow friendships.

THURSDAY! We are hosting our first “Social Blendr: Meet the Party, Before the Party” event at Angels & Kings… fb.me/T0iaQLOE

We’re psyched to for our first party with @socialblendr tonight also!Join the fun

To make these bar partnerships I literally spent a whole week going to different bars pitching our idea, trying to get them excited about it, and asking for drinks specials and promotion. A lot of the bars I talked to were pretty excited about it. The hustle seemed to be paying off.

Next, I quickly learned how to use Mailchimp API and put together these awesome emails to send to all my friends to let them know about the events that we had put together. 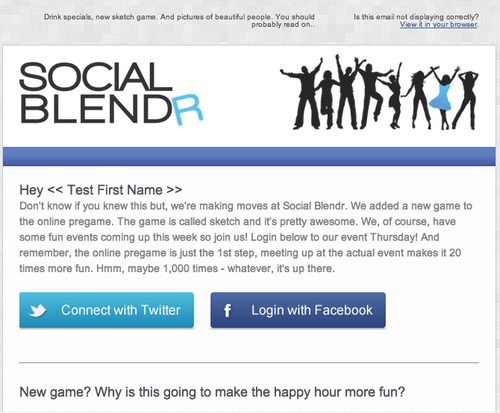 It hurt every time I saw one of my friends unsubscribed from these emails.

Meanwhile, Will was hustling to put together these online pregames, I was helping where I could and texting friends to come out to all these events that we had set up. So how did these events go? Let’s just say the turnout was less than stellar. We were trying to promote people to come to events while at the same time encouraging them to go to our website and play these online pregames that we had built. It was a big ask for our users and as such we were only able to get a few people to meet online and even fewer to come to the events in real life.

Get Into An Incubator / Secure Seed Investment

I put together a pitch deck, then was told to put together a financial pitch deck. I ran the deck by whomever would take a look at it. I met with the New York Small Business Services - which was very helpful, and sent it to every mentor that I could reach out to. After about 7 different versions of the deck I started showing it around. I used my resources scored a meeting with a few VC firms and some angel investors. I drove to Boston for a day to meet with an VC firm, drove to Greenwich, CT for a meeting - basically whomever would meet with me. The overwhelming response was that we didn’t have enough traction but keep up the good work. Well, the good work would soon have to stop because we were both going broke. Then Hurricane Sandy hit and well, you can read about Will’s version of the rest.

Take Over The World

Looking back on it, Will and I put our heart and soul into Social Blendr and hustled our ass off. Some of the ridiculous (in retrospect) things we did to hustle and fuel start up:

So what were my main take aways from this whole thing?

Will and I certainly had no shortage of effort we put into Social Blendr. Doesn’t mean in was effective or smart. We were kind of like chickens running around with our heads cut off.

In retrospect we were just trying to do our best and were figuring it out as we went along. Faults of a first time entrepreneur. We could have been a lot of smarter in how we tried to build the app and about how we tried to get users. Trial and error didn’t really work out.

We thought that if we got into an incubator that would solve all our problems. It would be like a magic wand that would make our startup succeed. While incubators do offer a ton of resources and a definite leg up my feeling is that they just speed up your startup. So if you were heading down a failing path, you’ll just fail faster and vice versa. That being said, we put way too much focus on trying to get into an incubator and not enough focus on building a great product and getting a ton of users. We were building a product for the incubator and not for it’s real use.

The way things happened with Social Blendr, we had no choice but to let it go. Will and I are both fighters and I think we would have kept trying to make it work, but we literally couldn’t. 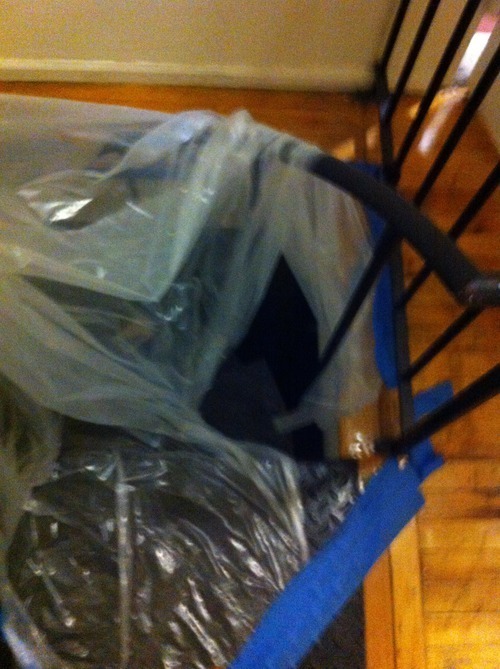 (Our taped up apartment after Sandy)

We probably should have started winding down Social Blendr when we first ran out of money but we kept it going. Our hope was to overcome it with hustle and for us the thought of giving up was less than cool. But if we really paid attention to the signs we might have done things differently. That being said, I’m a believer that everything happens for a reason and we learned some valuable lessons from the entirety of the experience.

So hustle hard startups, but be smart about it, because hustle alone won’t cut it.